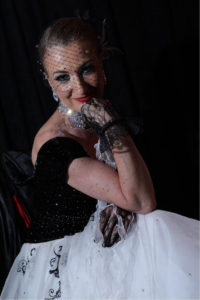 Drawing from years of experience, award recognition's and definitive vision, Monique Saviano has established herself as a premier designer of dance couture dresses.

Each dress is meticulously made and sophisticated and because Monique is a dancer herself, she understands dance construction.

Her dress design architecture, materials and form are all suited for the floor.

These dance couture dresses will stand the test of time as classics.

Appeared on KCSM "The Bay Today" segment on Fashion & Beauty

Participant in David Sassoon Day at Association of Sewing and Design Professionals’ conference in Chicago, 2008

“Monique Saviano’s silk organza and burnout velvet gored skirt is gorgeously textured and moved with the beauty of a galloping unicorn –okay, maybe not a unicorn, but there was something magically nymph like and fantastical about that skirt.” By Dino-Ray Ramos in “Canada College is alive with FASHION!”, Oakland Tribune, Oct. 23rd, 2007

A blog about Wordpress design, development , Software and inspiration http://themesharebd.blogspot.com